Myller’s animal figures, mysterious horsemen and enigmatic winged characters form an entire mythological universe. The viewer can only guess at the meaning of its heroes and gods based on more familiar mythical imagery. 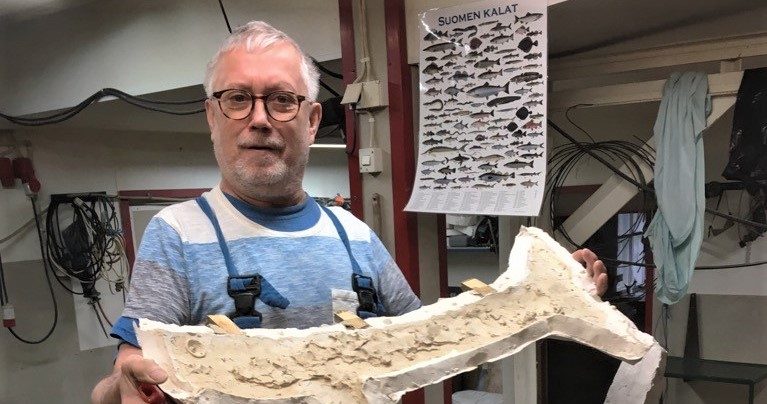 Veikko Myller has created his own, personal style that is easily recognizable. His sculptures are coloured and clearly representational, often to the point of being narrative. Myller’s animal figures, mysterious horsemen and enigmatic winged characters form an entire mythological universe. The viewer can only guess at the meaning of its heroes and gods based on more familiar mythical imagery. Myller is not particularly serious. The grandeur and lyrical nature of his mythical creatures easily leans towards playfulness through facial expressions or the relationships between figures related to entire works.

The Kontakti sculpture (Contact, 2013) has already been displayed at Kultaranta in Myller’s private exhibition in 2015. The Foundation purchased the work, and since then it has been on display in summer in the Kultaranta park. Myller has depicted a human figure dressed in plain clothing and headdress. The character is leaning slightly forward to greet a dog who is about to sit down before him. The light green colour of both figures resembles the patina of bronze while simultaneously highlighting the unity of composition and the symbolic connection between two living creatures. One could even see a narrative motif, if one so desires. This could be specifically about an encounter between two individuals previously unknown to one another in a world that ended long ago. The headdress is the key to the story. In ancient Greece, a conical hat was called pilos. It was a travelling hat, and a person wearing one was identified as a traveller. For example, Hermes, protector of travellers, was often depicted in art wearing a pilos, while in ancient Rome slaves were freed in a special ceremony where a conical hat made of felt or leather, pilleus, was placed on their shaved head. During his journey, Myller’s traveller or former slave has unexpectedly run into another free traveller, with both of them ready to seek company on their lonely path.

Veikko Myller (b. 1951 in Joensuu) studied at the Drawing School of the Turku Art Society in 1969–72. His works were on display for the first time in the exhibition Kesä -69 (Summer -69) in the Joensuu Art Museum in 1969. Public sculptures by Myller are Vastuun vuodet (Years of Responsibility, President Risto Ryti Monument) erected in the Hesperia Park in Helsinki in 1994, Kulkurin uni (Vagabond’s Dream, Tapio Rautavaara Monument) unveiled in Oulunkylä Park in Helsinki in 2001. Veikko Myller won the third prize in the Lapua Settler’s Monument competition and the first prize in the Risto Ryti Monument competition. He received the Kultaranta Award of the Alfred Kordelin Foundation in 2015.