Sigrid Schaumann beautifully described Jansson’s skills in working with materials in Svenska Pressen newspaper on 9 February 1931: “In the sculptor’s hands, clay no longer feels like a material, but like a thought or a dream in itself.” 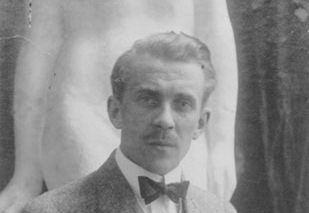 Viktor Jansson was one of the most notable Finnish sculptors during the interwar period. As an artist, however, he has been overshadowed by his daughter Tove, as have all other members of the talented artistic family: Viktor’s spouse, graphic artist Signe Hammarsten-Jansson, and their sons, art photographer and author Per-Olov Jansson and comic book artist and author Lars Jansson. By artistic nature, Viktor Jansson was not so much a sculptor, but a moulder who formed the shape he desired from clay or plaster in an empty space. Only rarely did he use granite or marble as materials. Sigrid Schaumann beautifully described Jansson’s skills in working with materials in Svenska Pressen newspaper on 9 February 1931: In the sculptor’s hands, clay no longer feels like a material, but like a thought or a dream in itself. Viktor Jansson is known for his hero monuments, but his favourite subjects were stylized nude female figures and children.

Placed inside the pool of the Finland Garden, Knock out (1937) is part of a series of compositionally similar fountain sculptures bursting with the joy of living that depict little boys balancing on a fish or a ball. Many of them were erected in Helsinki, such as Poika ja kala (The Boy and the Fish, 1935, yard of the Grönblom House), Leikki II (Play II, 1942, also known as Aallottaria / Water Nymphs, Esplanadi Park) and Hei vaan (Hey, 1942, also known as Ilmaiskyyti and Vapaakyyti / Free Ride, Esplanadi Park). According to Ari Latvi, who has studied Jansson’s art, the Knock out sculpture exhibits features typical of most of Jansson’s fountain sculptures: the stylized wave of the base, the vivid and gracefully decorative line composition, the solidness of form and the exuberant little rascals of boys who are doing everything they can to keep their balance in their wild water games.

The Knock out sculpture was originally commissioned by solicitor Ernst Nygren and was completed in 1937. The current location of the original work is unknown. A plaster original was received by the Tampere Art Museum as a donation from the artist’s estate, based on which the bronze version at the exhibition was cast in 1991.

Viktor Jansson (1886, Helsinki – 1958, Helsinki) studied at the School of Drawing of the Finnish Art Society in 1903–05. He made a study trip to Paris in 1908–09 and studied at the Académie de la Grande Chaumière for some time. On his second stay in Paris in 1910–1911, he met his future wife, the artist Signe Hammarsten from Småland, Sweden. Their daughter, Tove Jansson, was born in 1914. Viktor Jansson’s works were on display for the first time in an exhibition in 1908 at the Ateneum Art Museum in Helsinki. Jansson made numerous public works, of which the well-known ones are e.g. the Statues of Liberty unveiled in Tampere and Lahti in 1921. Jansson’s favourite motifs included stylised nude female figures, such as Convolvulus (with Tove Jansson as the model) installed in Kaisaniemi Park, Helsinki in 1931, and humorous fountain sculptures of small format. Viktor Jansson succeeded in numerous art competitions. He was awarded for the first time in 1907 when he won the second prize in the Ducat competition of the Finnish Art Society. He was awarded the last time in 1956 when he also won the second prize in the Helsinki School of Economics fountain sculpture competition.

b. 1886
Helsinki
d. 1958
Helsinki
Studies and prizes
1903–1905
the School of Drawing of the Finnish Art Society
1908–09, 1910–1911
studied at the Académie de la Grande Chaumière for some time
1907
the second prize in the Ducat competition of the Finnish Art Society
1956
the second prize in the Helsinki School of Economics fountain sculpture competition
Works
1921
the Statues of Liberty in Tampere and Lahti
1931
"Convolvulus" in Kaisaniemi Park, Helsinki