Tieaho likes to work in large scale. In recent years, she has also created multi-material installations using a chainsaw. The artist says she gets her inspiration from nature, life and literature. 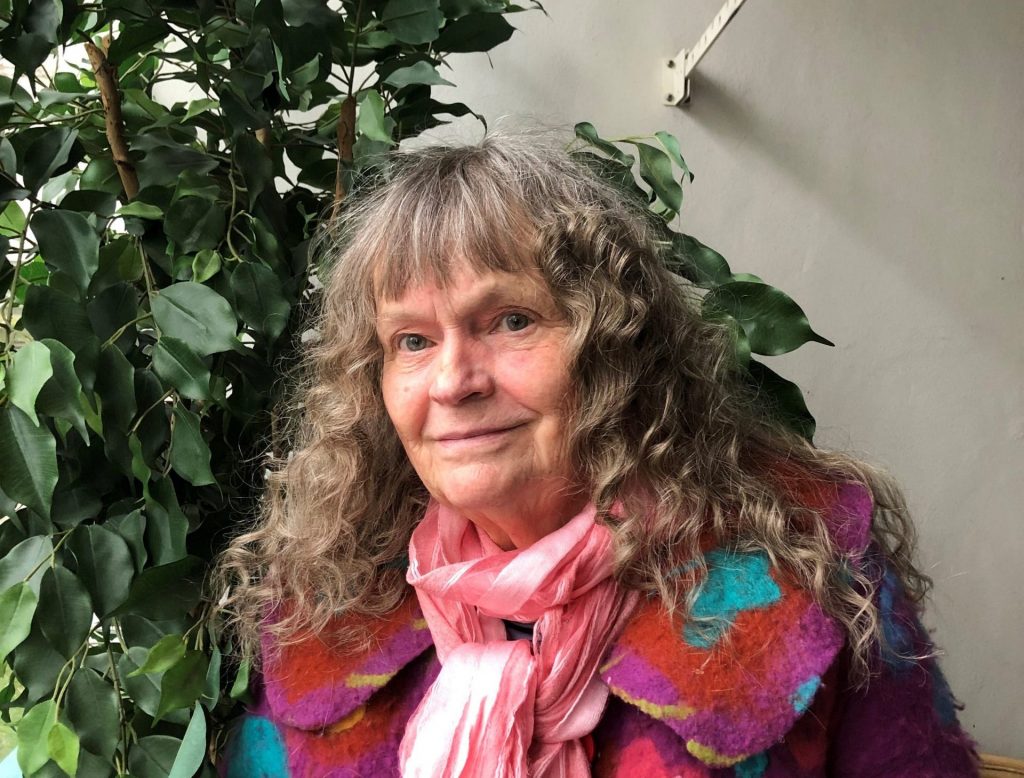 Barbara Tieaho (b. 1944) has worked as an artist for more than 40 years. Her career could have been even longer, but starting a family postponed the beginning of her full-time artistic work. Barbara Tieaho’s daughter Jenni Tieaho, who also became a sculptor, introduced her works in Kultaranta at the Encounters exhibition in the summer of 2021. In her art, Barbara Tieaho has used various techniques and materials very flexibly. She has made sculptures out of bronze, wood, plastic, stone and concrete as well as recycled and natural materials. She has also used video and cinema as her means of expression. Tieaho likes to work in large scale. In recent years, she has also created multi-material installations using a chainsaw. The artist says she gets her inspiration from nature, life and literature.

In the 2010s, Tieaho was inspired to use birch bark in her works. She had used various wood materials before, especially pine. The white-trunked birch is most common deciduous tree in Finland, but only the third most common type of tree after pine and fir. Birch has traditionally been used for carving various utility items from tableware to cartwheels and skis to axe handles. Birch sap has been consumed in the spring to combat exhaustion, and as a detergent it is believed to make the face more beautiful, while birch bark due to its lightness and elasticity used to play a part somewhat similar to plastic today. Birch bark was used for making various utility items like knapsacks and shoes, baskets and tableware. It was used in buildings as roofing material and for caulking. Hundreds of years ago birch bark could also be used as a form of payment alongside grain and furs. Barbara Tieho makes works of art out of birch and its bark.

Works by Tieaho that are included in the Natural Forms exhibition are Kuutamotango (Moonlight Tango, 2003), Kulkue (Procession, 2014), Tähystäjä (Watcher, 2014) and Pillipiipari (Pied Piper, 2022). In her art, Tieaho moves freely in time and space. Kulkue can be seen as pure abstraction, Tähystäjä is set in mythological times, Pillipiipari in the ancient and universal shepherd boy motif and Kuutamotango in yesterday’s Finland. The title Moonlight Tango, the shape of a heart and white birch bark carry one’s thoughts on the wings of nostalgia to a summer’s night, Finnish dance hall culture and the world of love, perhaps also the flame of love that often burns the heart in medieval poetry and troubadour lyrics.

Tieaho held her first solo exhibition at the Galleria Tallinvintti in Helsinki in 1983. Tieaho has participated in numerous group exhibitions in Finland and also in other countries, i.a. in Sweden, Mexico, USA, Iceland, Russia, France, Germany, Spain, Italy, Latvia and Switzerland. In addition to the State Art Deposit Collection, her works are included in many Finnish museum collections, in the collections of many Finnish cities and foundations and also in the collections of the Hafnarfjörður city museum and the City of Vestmannaeyjar in Iceland. Tieaho’s work Ystävyys (Friedship) won the first prize in an international sculpture contest in Härnosand, Sweden in 1989. She was awarded The City of Espoo Culture Award in 1995. Tieaho has also made many public works, e.g. Elon kaaret (Arcs of Life), erected in 1998 in the yard of the Jorvi Hospital in Espoo, Lokit (Seagulls), erected in Mexico in 1990, Tuulikoto (Shelter for Winds), erected in the City of Hafnarfjörður in Iceland in 1990 and Apila (Clover), erected (?) in the sculpture park of the City of Vestmannaeyjar also in Iceland in 1999.

s. 1944
Helsinki
Studies and Prizes
1995
The City of Espoo Culture Award
1989
Ystävyys (Friedship) won the first prize in an international sculpture contest in Härnosand, Sweden
1976–1980
The Fine Arts Academy of Finland
1970–1973
the Institute of Industrial Arts
Exhibitions and public works
1983
First solo exhibition at the Galleria Tallinvintti in Helsinki
1998
many public works, e.g. Elon kaaret (Arcs of Life), erected in 1998 in the yard of the Jorvi Hospital 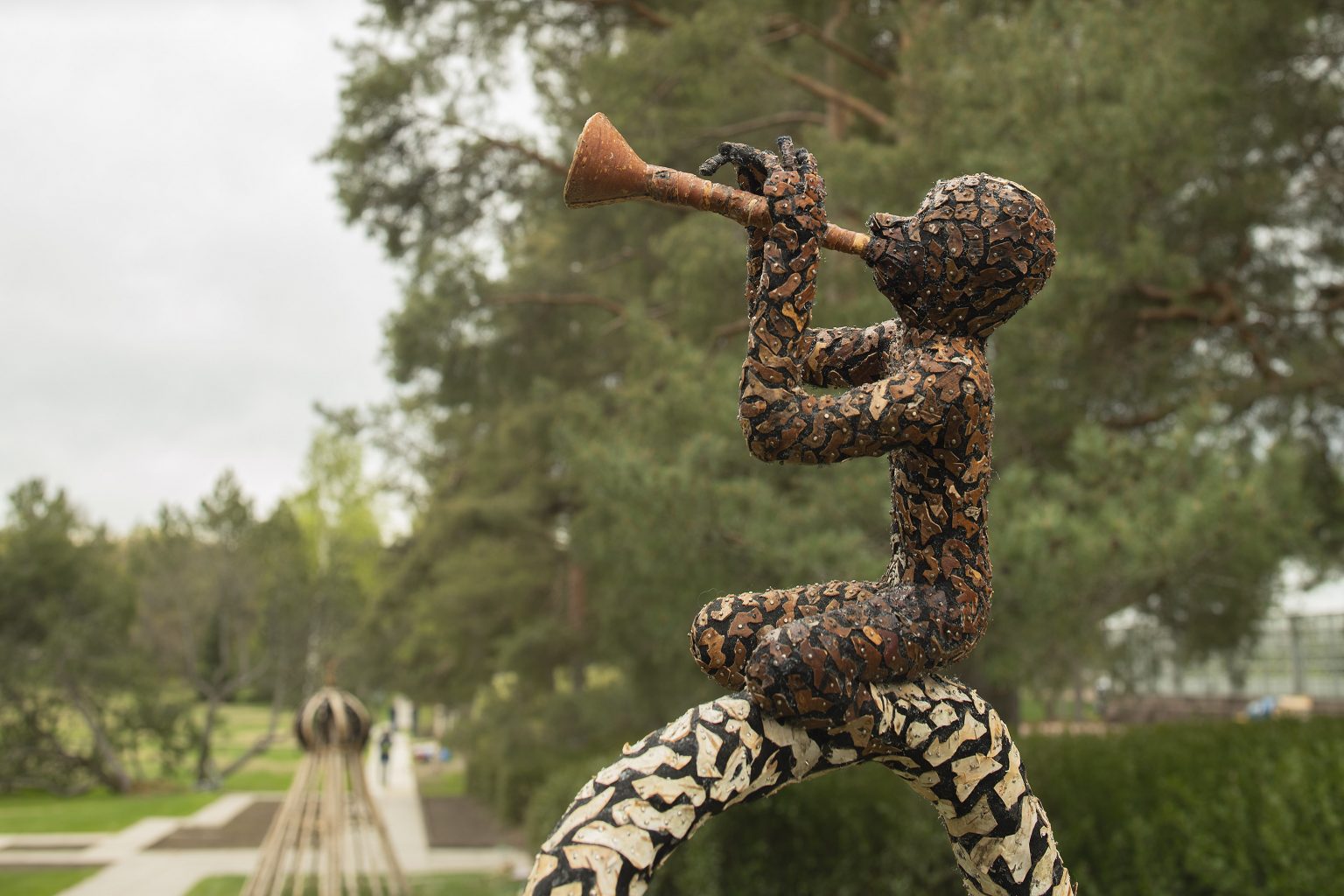 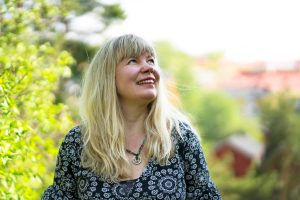 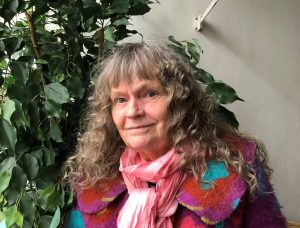 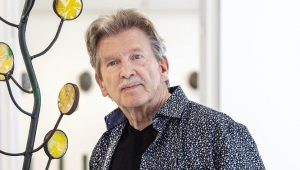 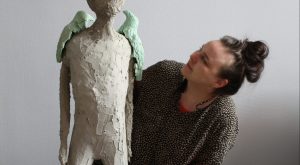 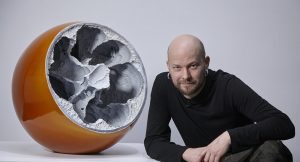